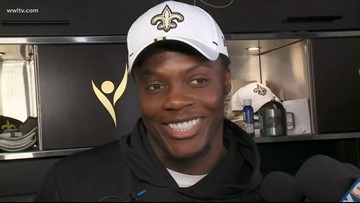 Teddy Bridgewater rides his bike to and from Saints games

Teddy Bridgewater rides his bike to the Superdome for home games

The Saints are 3-0 since Bridgewater took over for an injured Drew Brees.

NEW ORLEANS — You see a lot of people outside the Superdome after a Saints game, but have you seen Teddy Bridgewater?

The Saints QB let it slip after Sunday’s win over the Buccaneers that he rides his bike to and from home games.

Bridgewater says he loves the peaceful ride there and back, but he wouldn’t mind company.

“I had no idea it was a big deal,” Bridgewater said in the Saints locker room Wednesday. “If anyone wants to ride a bike with me I’m open to it, but you know, I enjoy my little ride to the stadium. It’s been a peaceful ride. I’m open to people riding with me though.”

RELATED: Optimism has never been higher for Saints – here are 4 reasons why

A reporter followed up and asked if the Saints backup QB was worried about hitting a pot hole on his bike.

“I’m more worried about my car than my bike,” he laughed.

The Saints are 3-0 since Bridgewater took over for an injured Drew Brees.

The Saints take on the Jacksonville Jaguars on the road Sunday. The game kicks off at noon on Sunday on Channel 4.

Early Signs You Might Have Hepatitis CHepatitis C | Search Ads